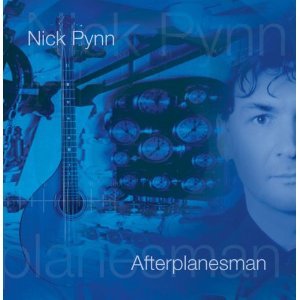 2004/08 release Afterplanesman is Nick's 3rd album and is widely considered to be his best.

"Having worked on previous solo CDs, an album of world fiddle music and many recording sessions, multi-instrumentalist Nick Pynn offers his new album Afterplanesman with 14 instrumental tracks. There are certainly surprises in store: violins, poetry, acoustic guitar and playing card sound effects on the surreal Joker Jack. In addition, Heriot Row slinks hypnotically through minor and diminished chords to reach a happy-sounding conclusion.Production companies should sit up and take note - this would sound very good indeed on films and programmes. Stunning and original, Afterplanesman is richly varied and wonderfully played with an intriguingly elusive style. A highly recommended recording. " Musician Magazine March 2005

"I don't remember exactly what I was expecting from Nick Pynn's Afterplanesman, but it certainly wasn't what happened. For one thing, albums rarely happen to a person; but Afterplanesman is something much different than a standard music recording.

Afterplanesman is a daring experiment, and a successful one. Each song is haunting rather than catchy; no one is going to hum the bird whistles of "Nocturne" or the dripping tap on "Off Nicholson Street." But each piece manages to find music not just on its own, but as a larger part of the album, like movements in a suite. It's as fantastic and as jarring as walking out of the house to find the birds singing in rhythm with the sound of distant traffic.

It's hard to call the tracks of Afterplanesman songs. There's almost no singing to be found, though several pieces, like "Joker Jack," use the patter of everyday speech to create something close to a melody. Pynn's vocals are spoken word, delivered in a dreamlike deadpan that perfectly complements the ethereal mix of sounds in his collection. The tracks transcend the form of songs -- indeed, some, like the eerie, atmospheric "Nocturne," have no song structure at all. But always there is poetry, and some interaction of voice and music that carries a piece beyond spoken word.

Afterplanesman is less an album than a tour of strange places, exotic landscapes grown with sound and populated with voices on the edge of familiarity. It's an enchanting trip, and won't use up your vacation time."