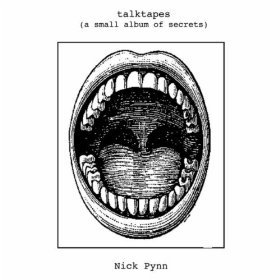 talktapes (a small album of secrets) is an ep of songs released December 2011. It is a foray into the clandestine and the cryptic.

My Hero in Wonderful Clothes

"Nick Pynn is an exceptionally talented singer and musician who’s quite a big splash on the Edinburgh Fringe and has appeared on the telly with Stewart Lee. We’ve had his talktapes (ROUNDHILL MUSIC RHLCD011) record here since December 2011 – just six songs in 14 minutes, and a splendid wee gem it be. Nick plays everything in an unusual one-man band set-up which includes guitars, violin, banjo, harmonium, theremin, and bass pedals, and I’d like to think all these songs were recorded live in one take, though that might be wishful thinking – there have to be some vocal overdubs in places. On top of these crisp, mostly-acoustic, inventive and dynamic folk-inflected tunes, Pynn sings in an endearing warm and muttery voice that induces almost instant trust in the listener – his uncontrived singing manner is reminiscent of Robert Wyatt or Kevin Ayers. An added dimension is the “cryptical” subtext that has bene packed into all six of these exquisite little miniatures – the subtitle for the album is “a small album of secrets”, one song deals with a “secret obsession”, and the dense lyrics deliver resemble crossword clues. I expect all this is Nick Pynn’s way of telling us that his poetic subject matter is just too personal to explain, which is as it should be. I like crossword puzzles, but even I do not expect to make much headway in decoding this tapestry of delights, especially considering Pynn’s studio technique on the last song ‘The Secret World’ which deliberately obscures certain keywords through backwards-masking or slowed down tapes. In some ways this man might turn out to be the Kit Williams of music, and although there is no prize of a golden hare for listening to the album, in another decade (the 1970s) Pynn would have released a gatefold double LP for Island Records with a sumptuous, clue-laden cover illustration by Alan Cracknell. Very nice; along with all the refs above, I can also recommend this to fans of the literate and witty songs of Slapp Happy. Nick Pynn is one who knows how to make his notes “stand out” – it’s to do with simplicity and economy, instead of showing off or indulging one’s technique." Ed Pinsent- The Sound Projector