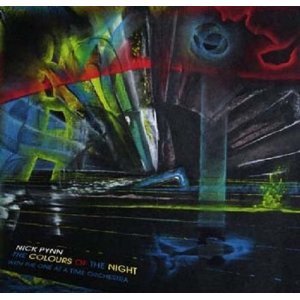 2009 release: The Colours of the Night

by Nick Pynn and the 'One at a Time Orchestra'

11/ Talking with the Enemy

Eight tracks are performed by an orchestra whose members haven’t yet met. Twelve musicians who happened to stop by at Bom-Bane’s in Brighton were asked to record their instrument’s parts in Nick’s studio above the cafe. The compositions, collectively named ‘What the Moon Showed me’, share a lunar thread embracing night journeys, childhood memories, dreams and insomnia. The six non-orchestral tracks feature smaller ensemble pieces with experimental, electro-acoustic and folk themes.

One of the nice surprises from last Autumn was Nick Pynn‘s The Colours Of The Night (ROUNDHILL RHLCD 09), an instrumental CD of compositions by Pynn and played by The One At A Time Orchestra, a small chamber ensemble which includes the wonderful Bela Emerson among its ranks. Very difficult to categorise this lively and warm lyrical music, which seems to embrace all aspects of popular classics, English revivalist folk and folk-rock music (in particular the work of John Renbourn, and Ashley Hutchings), light jazz, the arrangements for Pet Sounds, and many other things – but that list simply gets in the way of appreciating Pynn’s originality. You can gather however that atonality and 12-tone dissonances are the last thing on his mind as he paints these evocative sound pictures with their equally evocative titles. One of the most impressive aspects of this record is that the players didn’t actually meet up, but added their contributions ‘one at a time’ by means of overdubbing (most of the basic foundation had already been recorded by multi-instrumentalist Pynn) and did so in the composer’s studio which is situated above a little cafe in Brighton. A simply gorgeous record results. Ed Pinsent The Sound Projector

Nick Pynn: The Colours of the Night

On his mini masterpiece Afterplanesman, Nick Pynn intertwined loops of self-made stringed instruments to create intricate, unpredictable compositions humanised by the acoustic textures of folk music. His follow-up finds him multilayering a dozen guest musicians, one by one, in the attic of his Brighton cafe. Pynn purists might miss the unadorned simplicity of his signature sounds, but Cala Azzurro’s light-fingered pizzicato shines out, A Long Way Down is a vertigo-inducing cello scrape, Yankel fabricates an authentically Yiddish-sounding fiddle lament, and Breakwater, a duet for cello and analogue answerphone feedback that is one of Pynn’s finest moments, points a new path forwards. Roundhill RHLCD09 The Sunday Times 15-11-09

NICK PYNN – The Colours Of The Night (Roundhill) - "Nick Pynn performs solo, but displays the bizarre and wonderful talent of becoming an entire orchestra” so reads the press release for his recent live shows. The multi-instrumentalist serves a rather fine, very English sounding, set of rather delicate contemporary classical folk tunes: Dense layers of looped samples dance with very organic strings, violins, medieval richness, orchestral refinement, light-footed delights, classical twists. Typewriters for rhythm and a self made ukulele crafted from a coconut, but this does sound delightfully traditional and almost other-worldly. All rather relaxing and indeed classically beautiful in a relaxed sunny orchestral folk kind of way. www.myspace.com/nickpynn The Organ October 09